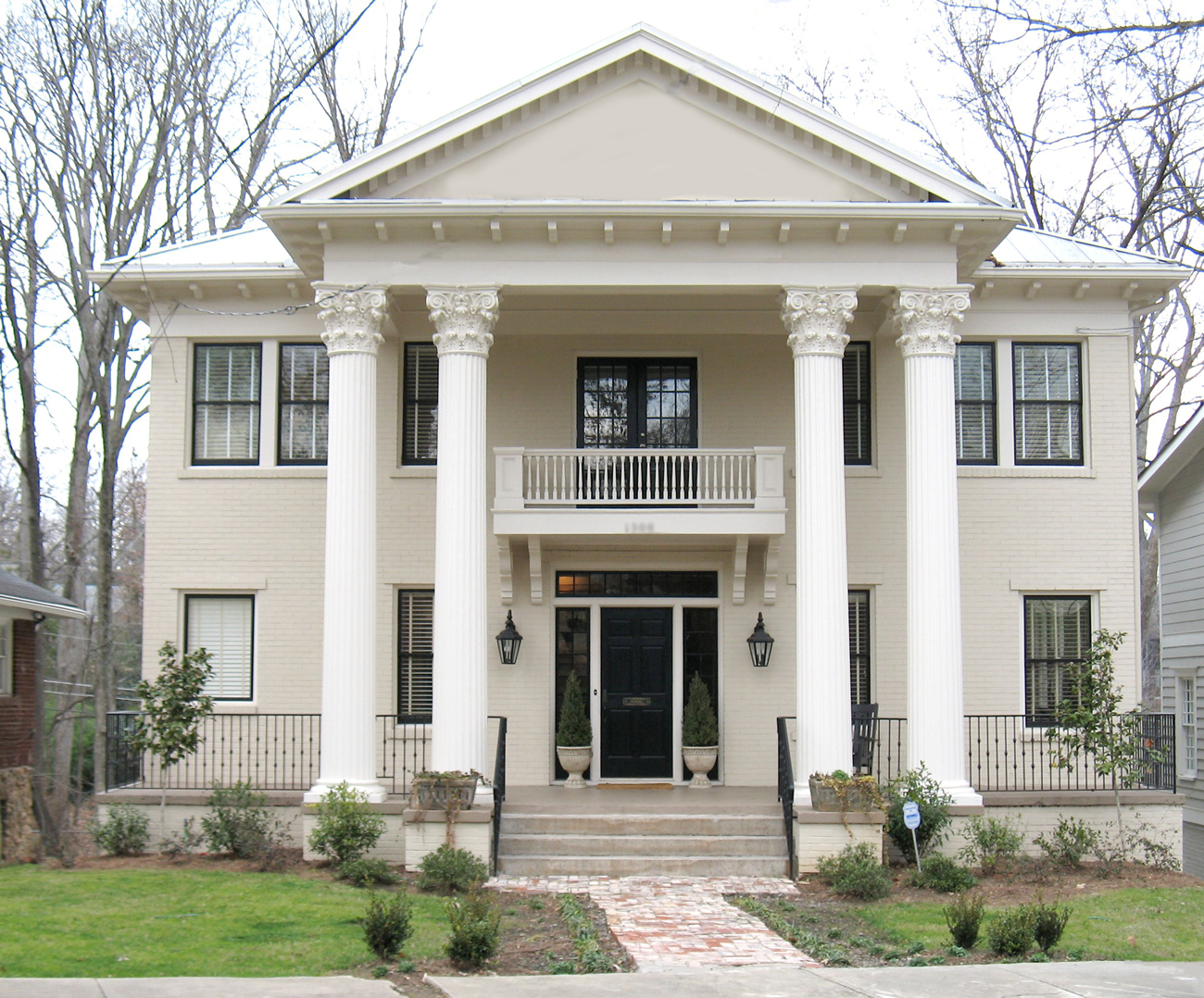 Leila Ross Wilburn, Georgia’s first woman architect, originally designed and built this home in Candler Park as a duplex for a prominent businessman, for his two daughters. Each daughter had a separate flat on each floor, and the basement contained servants quarters. Construction was finished in 1920. Over the years the house became run-down and neglected. By the time our clients bought it, the house was uninhabitable.

We found a construction photo of the house from 1920 in records of The Kenan Research Center at The Atlanta History Center.

To begin the project’s design, we carefully took measurements, then created plans and elevations of the existing house in our Pre-Design Phase. Led by our Principal Architect, Greg Mix, RA, AIA, we began work with the owner to lay out new floor plans and elevations in the Schematic Design Phase, which were then refined many times through our Design Development Phase, before producing Construction Documents.

The house is located in the Historic Candler Park neighborhood on the edge of Historic Druid Hills. Due to site restrictions in the City of Atlanta, much coordination with the Department of Planning and Zoning was required.

The main entrance leads into the first floor living room of the original first floor duplex unit. The second floor unit had been accessed from a single door on the left end of the front porch. (Scroll down to see the BEFORE photos.) To convert the duplex into a single-family residence, we replaced the former entry door to the upper duplex with a window matching those nearby, and we altered the stairway to be open to the new living room. This connected the first floor of the home and made the living room as grand as other homes of its era. 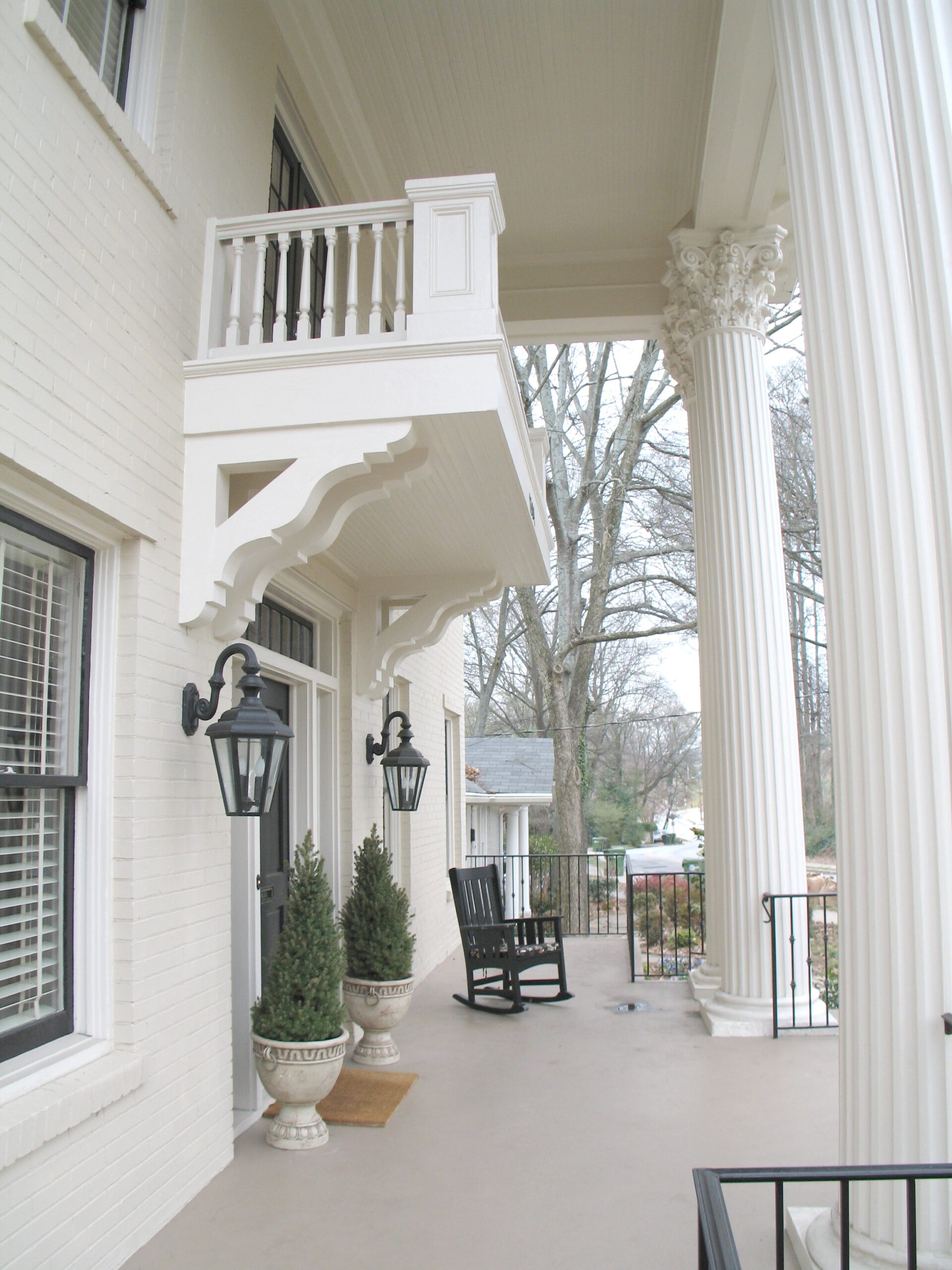 The original carpentry on the existing front porch must have been done by an expert. All of the exterior trim and porch work was built from Florida cypress, a wood that is naturally very resistant to rot and decay. That is probably why it is so well preserved. 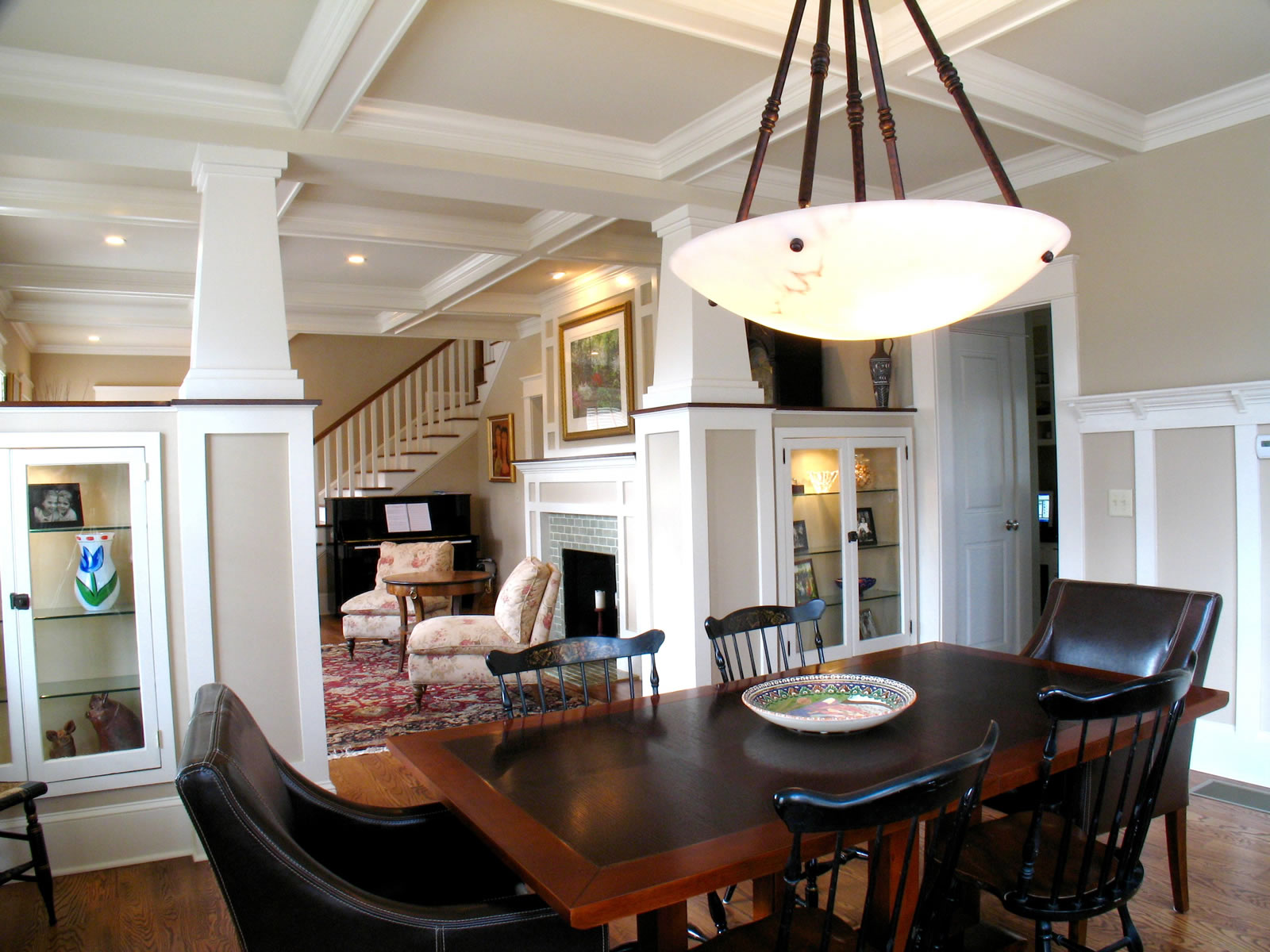 The coffered ceiling carries through from the Formal Dining, over the hidden structural beam above the open partition, and across the seating Foyer (aka “Living”), to the edge of the Staircase to the Upper Level. 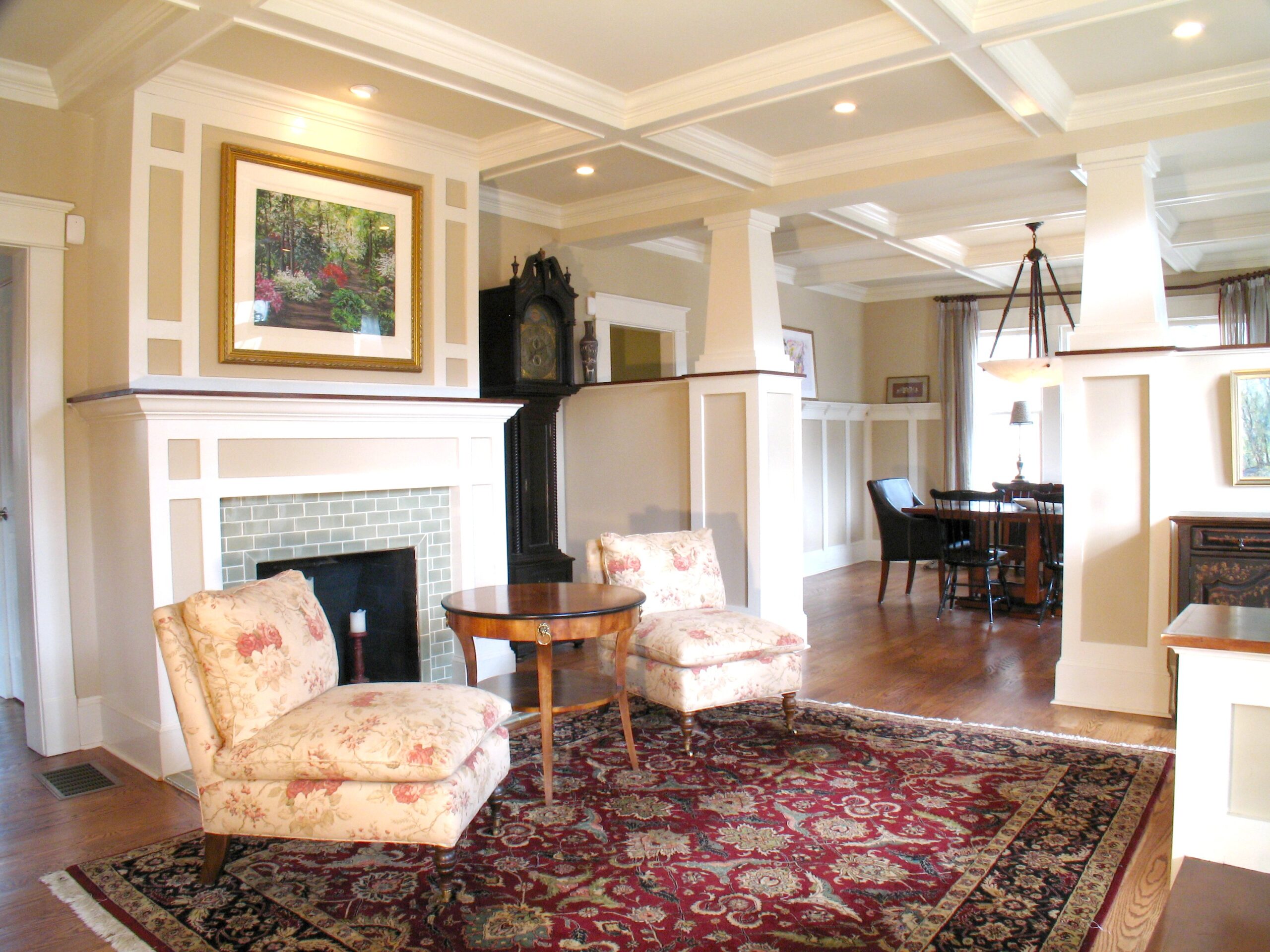 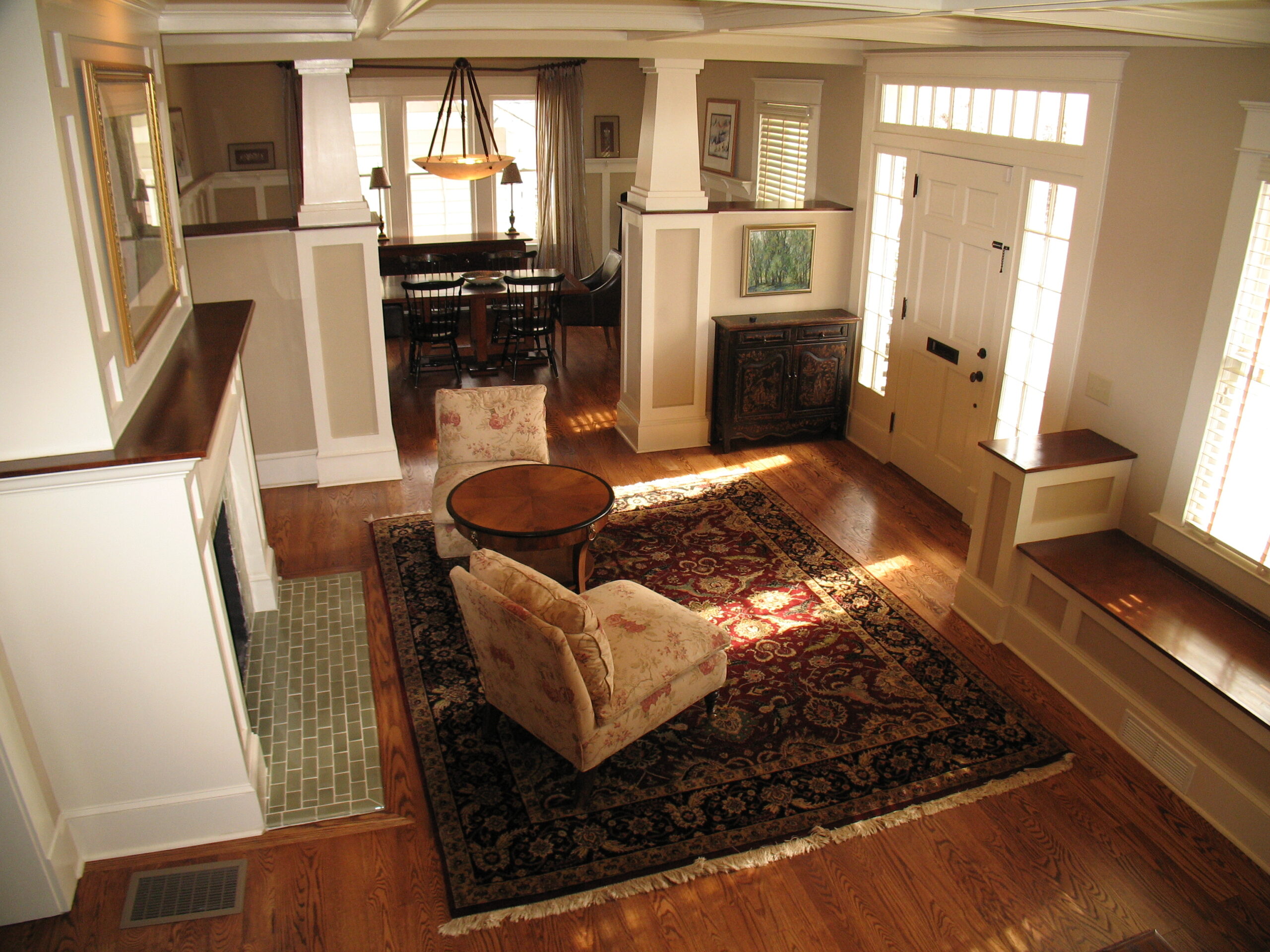 Notice, here, a couple of understated details. One is the subtle curvature of the first two stair treads, indicating a welcome to those invited to the Upper Level, yet also enhancing the specialness of the Piano Nook to the right of the Stairway Landing. The second detail to consider is the bench below the window; not only does it contain a bit of storage below its hinged seat, but it also conceals some essential utilities beneath, which come from the Mechanical Room in the Lower Level, below this space. 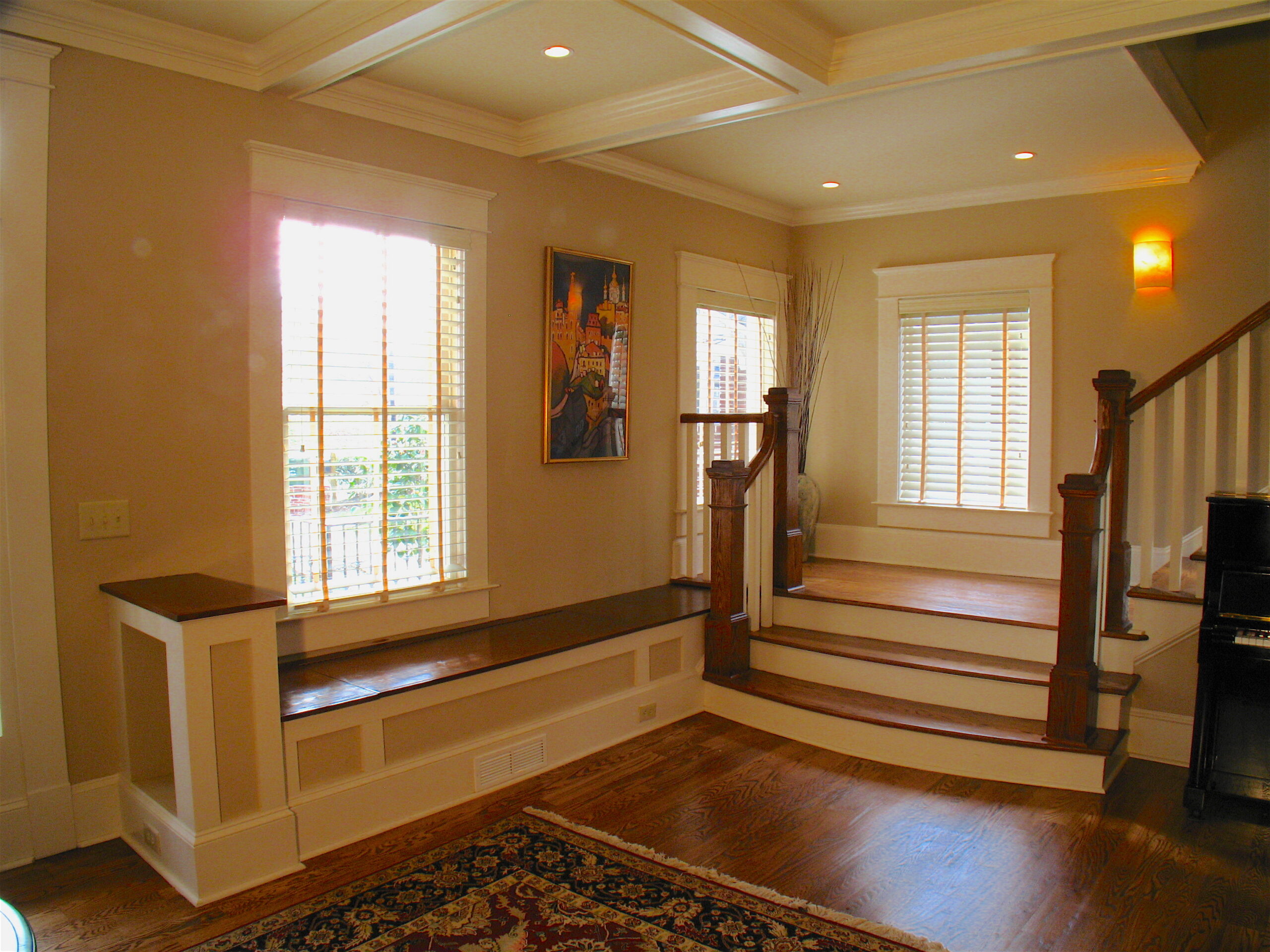 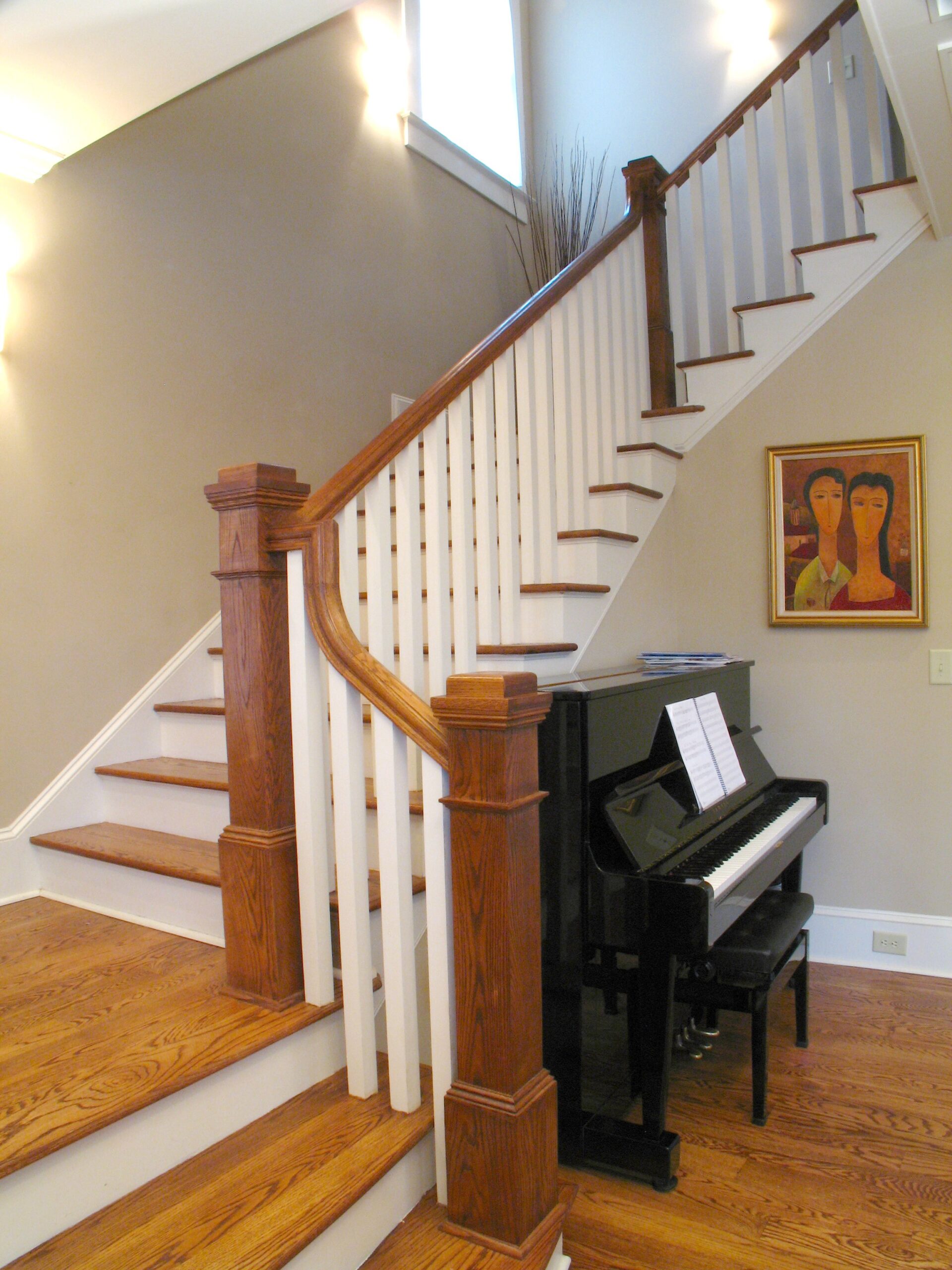 The view to the east from the Balcony off of the Master Sitting, across Freedom Park, is difficult to match! 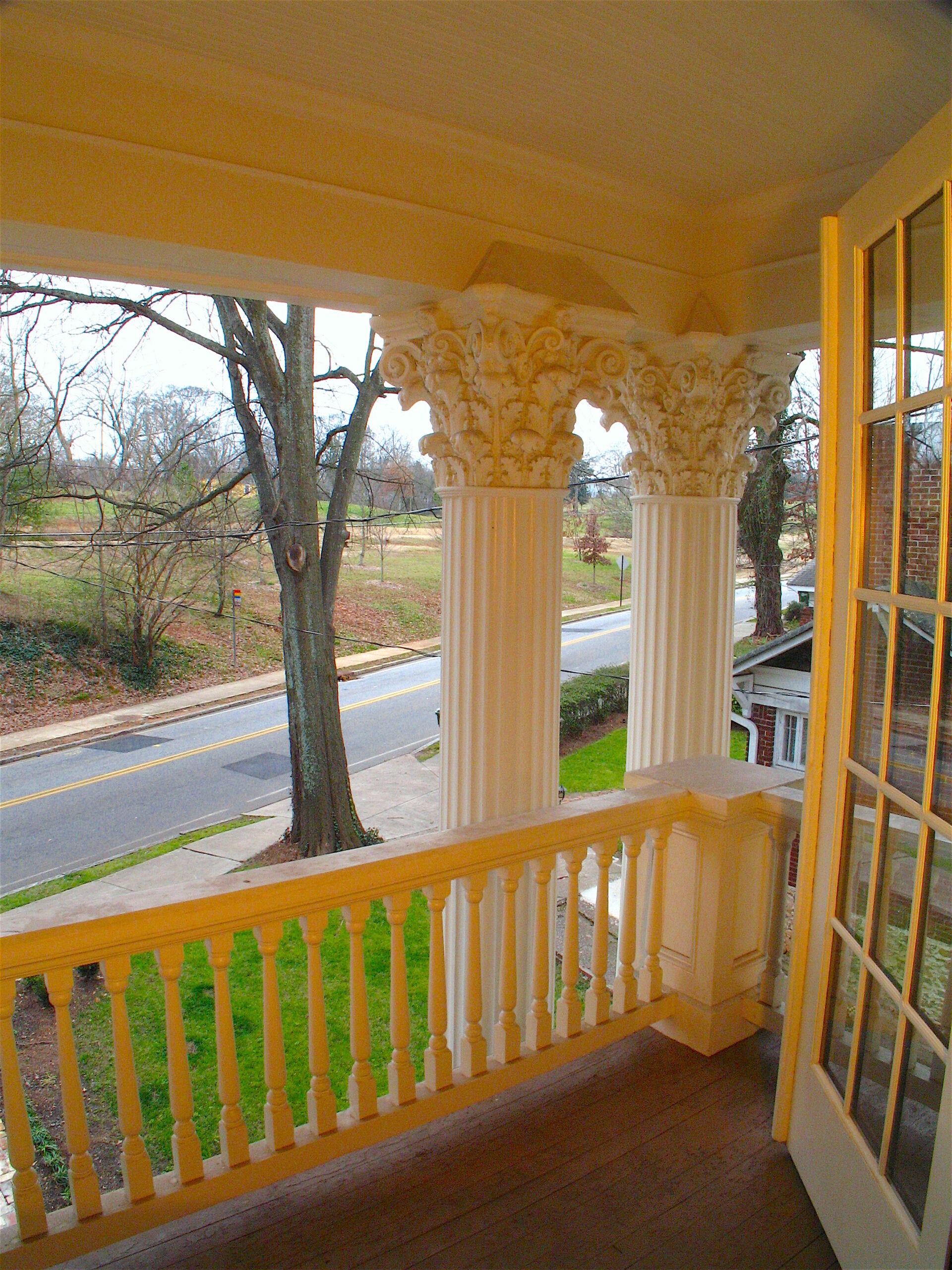 From the Mail Level, the view from the Rear Porch across the green areas between houses is most soothing. Screening has not yet been installed in this view, although labeled “Screen Porch” in the plans. 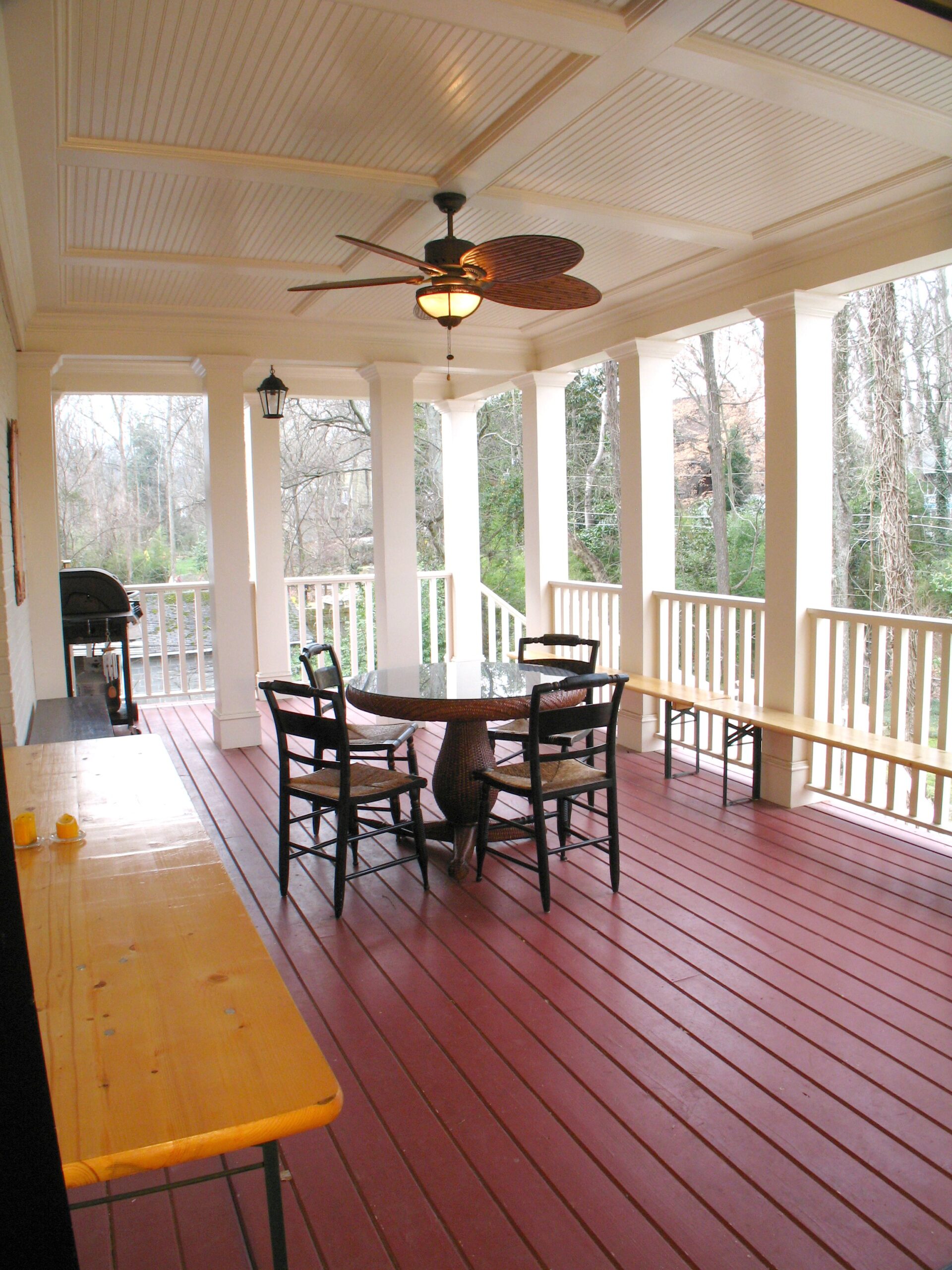 The next view is the rear view of the home from the back yard motor court. The Screen Porch is well elevated above, to allow greener views, further to the rear, yet allows a pleasant aspect when seen from this vantage. 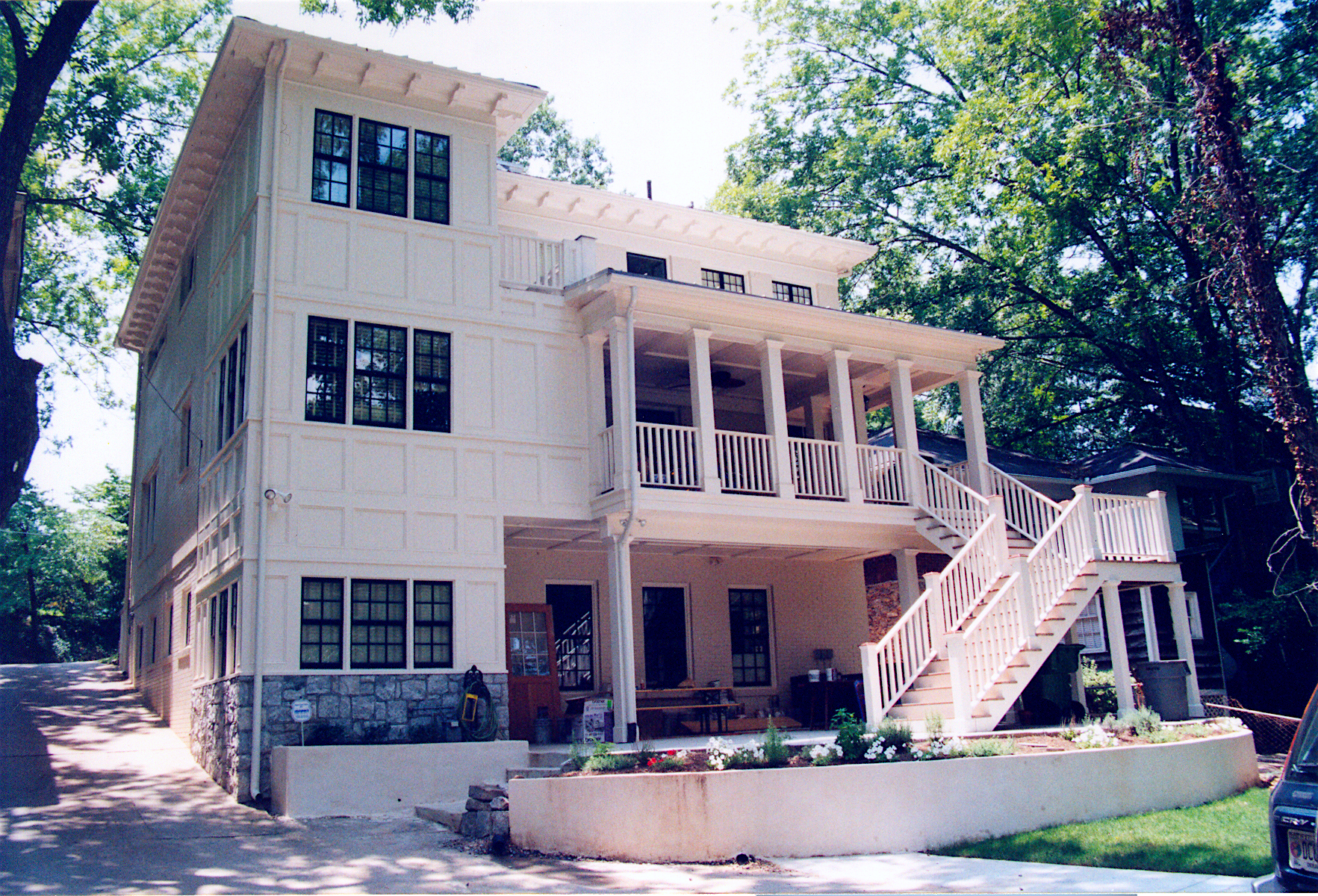 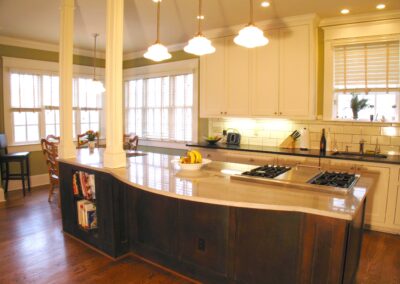 View from Keeping into Kitchen

Across from the snacking bar, we can help our host, or just chat, to prep delicious snacks and enjoy samples, as well as watch cooking from the downdraft cooktop! View from Keeping into Kitchen. 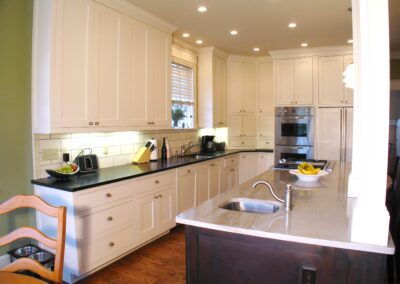 View from Breakfast Nook into Kitchen

Plenty of prep space, plus two sinks for multiple cooks, and a dual oven, right next to fantastic eating spaces! 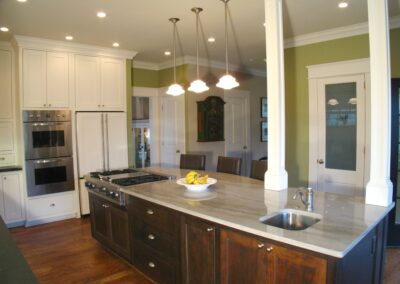 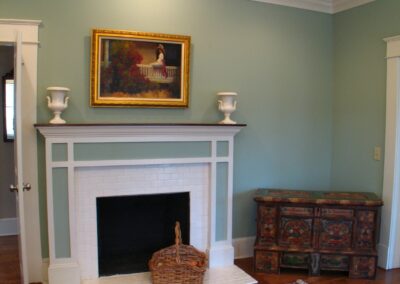 Colors are kept simple with a medium moss green and white trim, with floor left to its original (refinished) darker red tones, with furnishings and accessories to enhance the warmth. 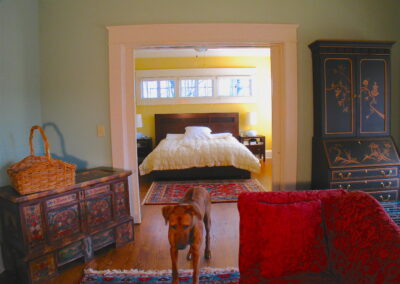 View of Master Sleeping from Master Sitting — and the Pup said, “Please, don’t tell Mom & Dad you caught me on the bed!” 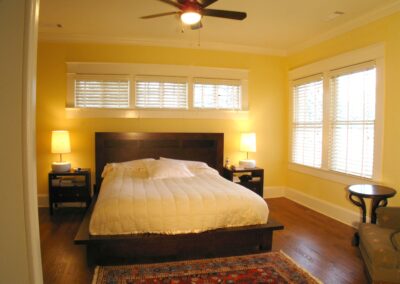 Master Sleeping, Candler Park Home Renovation. Soft light from the northern windows above the bed helps mitigate potential glare from the eastern windows in the right of the photo. 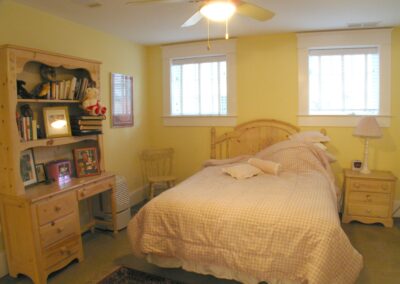 Much work was required to strip away, sand down, and repair eighty-five years of old paint, dirt and neglect. Once the craftsmen had removed the heavy layers of old paint from the cantilevered porch and two-story columns and repainted them, they looked like new. Only rarely do we recommend painting brick, but due to the significantly deteriorated condition of the brick and mortar, it was decided with the owner to seal and protect it with paint. Click on the BEFORE views to see a bit more detail. 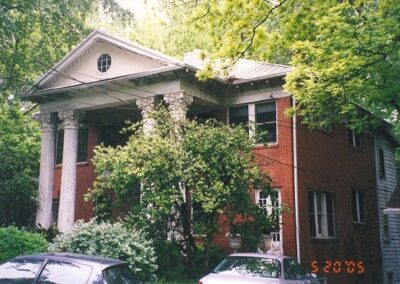 Much of the brick and mortar had suffered deterioration through decades of neglect. Trim had been subjected to water damage, and a later addition at the rear, clad in clapboard siding, had suffered moisture intrusion that required demolition. 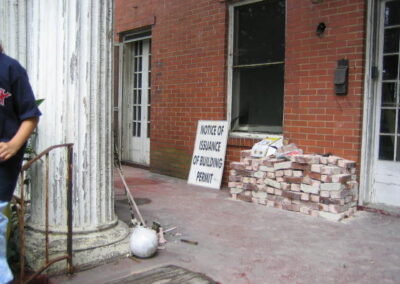 At the left, beyond the column, the former entrance door to the Upper Level Duplex is seen. When we de-duplexed the building, we converted that door into a window with detailing compatible with other windows in the house. 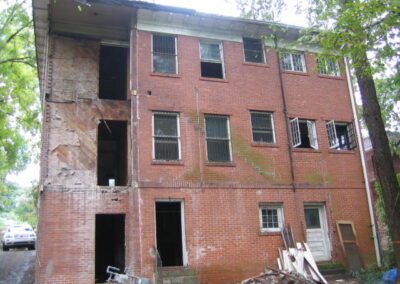 BEFORE — Rear View at progress of demolition

Demolition of damaged, three-story, frame addition at left of image, along with careful dismantlement of other essential elements. Windows open to allow mustiness to clear from interior. 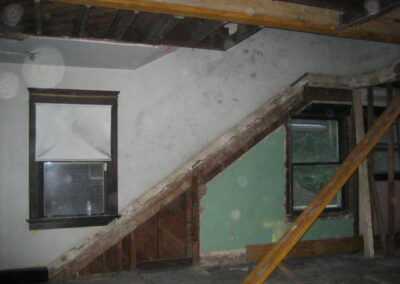 This is a comparatively small area for all of the accommodations, yet on a remarkably tight, urban lot with many restrictions. It required a great deal of interaction with local planning and zoning authorities, who were very helpful. It encloses a total of 4,257 square feet of conditioned area under roof, plus the Front Entry Porch, the Balcony off the Master Sitting (under the same Porch), the open rear Deck off the Master Bath, the Screen Porch on the rear Main Level, Deck off that Screen Porch, and the Patio on the Lower Level. Click on the Floor Plans to see how we arranged the spaces and managed to include the needed functions in such tight areas! 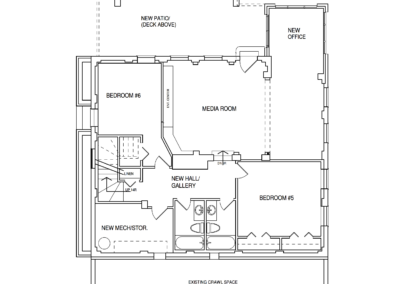 Fully Finished Lower Level features two Guest Bedrooms and two Baths, as well as a Media Room and an Office. A central Gallery connects these spaces to the Stair from the Main and Upper Levels. The Mechanical Room contains central systems for powering the house, heating and distributing water, and HVAC systems, and limited storage. There is also a sheltered Patio, just outdoors, as well as easy access to vehicle parking. 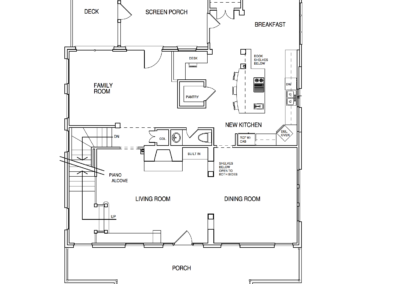 Fully Finished Main Level features Living Room, which doubles as a Foyer with formal seating for guests. The Formal Dining, to the right of the main entry door, continues the coffered ceiling, though divided by a semi-open partition with display shelving. Left of the entry door, the carefully detailed staircase beckons invited guests to the Upper Level. This stair had formerly been a private access to the second story duplex unit, prior to renovation. The rear portion of the Main Level contains the Family Room, luxurious Kitchen with island and Pantry, the Breakfast area, and ample access to a rear Screen Porch, plus a Deck with accommodations for grilling. There is a stair access down to vehicle parking below. 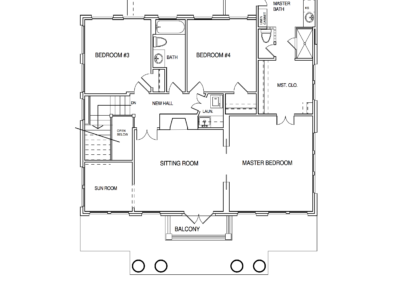 Upper Level features the Master Suite, which includes a Sunroom at the southeast corner of the house, a Sitting Room with a fireplace above that of the Living Room/Foyer, the Master Bedroom sleeping area, and the Master Bath and Closet. The Master Bath has direct access to a very private rear-facing Deck, well elevated above the surroundings, affording pleasant views from a private vantage. The other two Bedrooms face a pleasant rear view and access Bath and Laundry from the Hall.